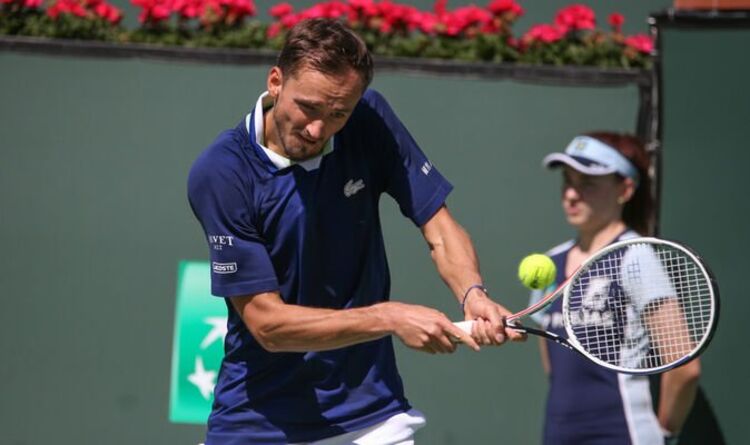 Russian tennis star Andrey Rublev has said players from his home country and Belarus should still be allowed to participate in tournaments amid the invasion of Ukraine.

As a result of the war, Russian and Belarusian tennis players are not allowed to compete under their country’s name or flag while also being banned from team competition. Women’s Tennis Association (WTA) chief Steve Simon recently insisted that female players should not be banned from tournaments because of politics.

Nigel Huddleston, UK government minister for sport, tourism and heritage, said he would seek “assurance” from Daniil Medvedev and his compatriots that they did not support Vladimir Putin’s aggressive moves. The government is said to be in talks with the All-England Lawn Tennis Club (AELTC) to determine its position ahead of Wimbledon, which begins on June 27.

Rublev advanced to the Indian Wells semi-finals after a 7-5 6-2 win over Grigor Dimitrov on Friday. The world number seven – who wrote ‘No war please’ on a camera lens after winning the semi-finals at the Dubai Tennis Championships in February – believes sport and politics should not be mixed.

“Talking about the UK government, it’s like I said, I think we should set a great example that tennis should be outside of politics,” the 24-year-old told reporters. “Not tennis, but sport in general. We are athletes. We want to compete. We sacrifice so many things.

“We don’t see our family. Many athletes change homes because of the conditions of the sport, they play basketball, football. If you go from one team to another, you move completely, stuff like that.

“I think that’s the biggest thing, that we’ve sacrificed a lot just to be able to compete, to show that we want to do our job, that’s all. I think sport should be outside of politics because everyone says so, but in the end it still doesn’t seem to be the case.

“That’s why I hope that in sport they will show that there is no politics and that we will be a good example to take a big step forward.”

Rublev initially received a number of negative messages when Russia declared war on Ukraine, but he also revealed that he received many positive comments. Fans and personalities supported him in defending his anti-war stance.

“I don’t know. I didn’t even – how do you say? I didn’t even think how many people would see this or where this would go or anything like that. I just wrote how I feel at this moment- there. That’s it. After that, it kind of gets over 22 million views.

“I think I was one of the first sports people in the world to say that. In the end, yes, all the messages that I start to receive, almost 100%, all of them were only positive, like, thank you, stuff like that.

Kadhe and Rawat in the ITF singles final | Tennis News